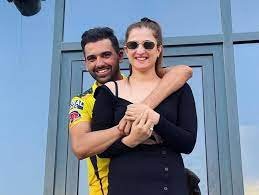 India Fast BowlersDeepak Chahar is capturing all the limelight at the moment. During the game between Chennai Super Kings (CSK) and Punjab Kings (PBKS), the Indian pacer proposed to his girlfriend and soon after the match, the video went viral on social media and Deepak Chahar trend on Twitter. During CSK’s innings, Deepak went into the VIP stand where the cricketers’ wives were sitting and knelt down to propose to his girlfriend.

She didn’t expect it at all and was surprised with even the others around clapping. Several cricketers’ wives were also present there as Deepak Chahar offered a ring to her. No wonder she accepted the proposal as the adorable got engaged at the same time.

Soon after the video went viral, the fans were excited to know more about Deepak’s girlfriend and here we bring you a few facts about her:

1. The name of Deepak Chahar’s girlfriend is Jaya Bhardwaj.

3. Jaya and Deepak know each other for a long time and the reports of them dating each other were doing the rounds for the last two months.

4. Jaya Bhardwaj is also the part of CSK’s bio-bubble as she traveled to the UAE to cheer the cricketer during the ongoing Indian Premier League (IPL) season.

5. Deepak Chahar’s girlfriend Jaya is from Delhi and works in a corporate firm.